Every once in a while a piece of wood comes my way that deserves something special. Last year I met Rob, an arborist from Oswestry, and Rob let me buy a few sycamore burrs that he’d trimmed from a fallen tree. Having never worked a sycamore burr before, I was a little hesitant to get started, as I didn’t want to get it wrong and waste what might well be a very special piece of timber.

I selected one piece, about the size of a large football and about three-quarters of a sphere, in shape. To cut it way from the trunk, Rob had plunged a chainsaw in from each side of the ball, which gave the burr its mostly spherical form, but also having a wedge-shape where it had formerly been joined to the trunk. This gave me a chance to make not only a bowl, but something extra out of the lump.

Firstly, I mounted the   whole lump on the lathe and roughed out the bowl shape, leaving the extra wedge shape still attached, and once I was happy with the outside of the bowl, I cut the three beads that you see in the picture below. Next I plunged a parting tool into what would be the inside of the bowl. cutting deeper and deeper until the wedge shape was held on by just a slender stem, which could then be snapped free with a firm thump from me.

With the wedge put to one side, I was then able to hollow the inside of the bowl properly, abrade it and seal its surface; and here it is! 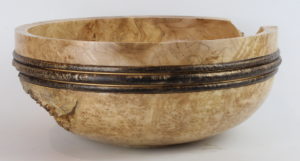 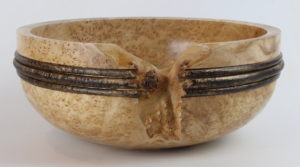 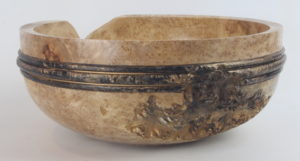 I was able to retain a couple of natural features of the burr’s outer surface and to echo its rugged nature, I scorched the three beads, cleaned them off then highlighted them with a light rubbing of gilding cream.

The wedge shape was very much smaller and called for a very different approach. I favoured a trumpet-horn shape, turned very thin. Normally, bowls turned this thin can be very flexible, and this is not always a good thing with burrs, as they can be brittle. However, the trumpet shape is surprisingly strong and stable, so I was able to take the thickness of the bowl down to a little over 1.5 mm, making it very delicate, especially when compared with the main bowl. 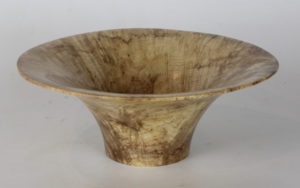 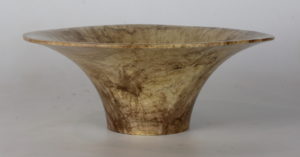 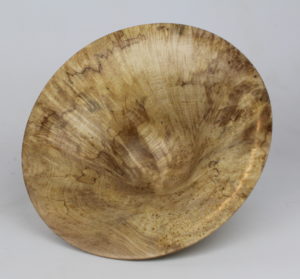 Finally, I worked an awkward shaped lump that was left over in the area between the two bowls. It was about 6″/15cm in diameter and a diamond shape, in profile, so I turned it into a trinket box, in a shape inspired by the Art Deco movement, in that it had sharp, clear lines which zig-zagged. I gave the box a foot and a lid/finial made from teak, recycled from old door-frames. 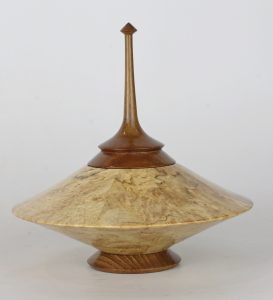 This all leaves me a problem. You recall that I said that this piece of burr was about the size and shape of a large football, well, amongst the batch are two very much larger pieces. One of them is so large that it will need to be cut into three or four pieces for any of them to be able to fit onto my lathe! That’s not a bad problem to have and one that I look forward to solving. 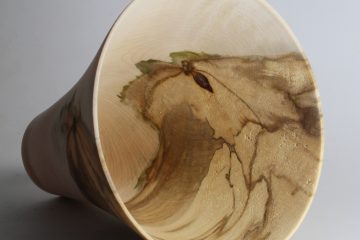 Going professional 4 years ago brought many challenges, not least of all, having to learn to take a photograph! OK, I already knew how to point a camera at a bowl and to take a Read more… 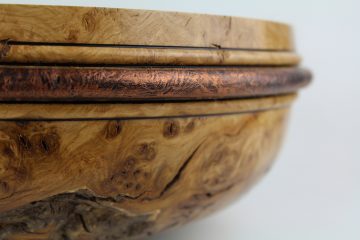 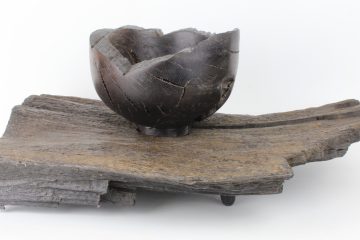 It seems much longer than five weeks since we closed up for Christmas, so what have we been up to? Tuition has taken up much of my time from the first few days of January, Read more…