Once a month, every month, I down tools in the workshop and turn to the laptop as my main source of work, by writing an article for Woodturning magazine. Sometimes these articles are about techniques, such as tool control, scorching and wire-binding, then at other times they’ll be about specific projects. Last month I finished a series of six articles about woodturning tools, so this month it felt great to be back at the lathe, making something for the magazine and photographing every little step of the processes involved.

One aspect of this as a means of earning a living is the secrecy behind what we do; we mustn’t disclose much about the article in advance, so that when it gets published and hits the shelves of the newsagents and book stores that sell it, all the images are new and have definitely not been seen anywhere on the internet or in print, prior to publication. That causes me a few problems because I love to share info about what I’m doing, so I often have to have a time-lag of a few months between the date when I make something and the date when I’m allowed to post any photos of it, or even to say what it is. So this month, I’m doing things a little differently.

This month I’m making something in a way that I’ve not worked before. I’m perfectly used to taking a huge, irregular shaped lump of timber and mounting it on the lathe to turn it round, but not this week. It started a couple of days ago by taking planked timber (just a small amount of it). The planks were then machined into clean, smooth pieces which were then glued up into a big awkward box shape – it seemed really odd to be working this way.

The big awkward box shape was then mounted on the lathe and instead of turning it into a nice, clean round shape, it had to stay square and boxy, so that was another challenge. When turning shapes like this, as they revolve at speed they can be very difficult to see. All the edges become blurred and you just know that if one of your knuckles extends just a few millimetres over the tool rest, pain will be the result! We tend to call this “Ghost turning”, or even “Turning air”, the latter referring to the fact that as the work revolves and the tools cut away, they cut a projecting corner, then nothing until the next corner comes into play, and so on, and on, and on. There’s a distinctive rattling, clattering noise in place of the normal whirring.

One peculiar aspect of this job was that the closed wooden box that I was working on had to have something cut into each of the six faces, whereas with a bowl there’s just two faces ( or sometimes three, if you have a wide rim). However, just one face of the box had to be cut through to form an opening, which was a little scary and I was more than grateful that I’d used plenty of good quality glue to assemble the box in the first place.

As a part of each article that I write, I have to produce a set of working drawings that the publisher’s boffins then re-draw into the magazine’s own format. I must admit that I sometimes make the item first and then produce the drawings afterwards, but not this time; I did it the proper way round. the picture below shows just one small detail from a set of five drawings, and then a glimpse of the detail in the drawing being made. It’s a decorative feature on whatever this box is, but I shan’t say more than that!

There were several of these decorative features, each quite fiddly and involving setting geometric shapes into other geometric shapes, which was quite a challenge, so a lot of maths was done to establish the sizes of gaps between each shape, and then little wooden blocks were cut so that when the shapes were glued in place, with the blocks tucked in between them, everything lined up well and looked right….tricky!

It’s all finished now, so tonight I’ll finish writing the text and then slot the pictures into the text so that the magazine’s readers can follow the process through both words and images. I have to break down the text into 32 distinct steps, each with a relevant photo, so hundreds of photos might be taken, and the best, most relevant 32 make it through to the article.

If you want to know what this project is, you’ll have to buy the October issue of the magazine, or perhaps I’ll write another blog about it once the magazine has been published! 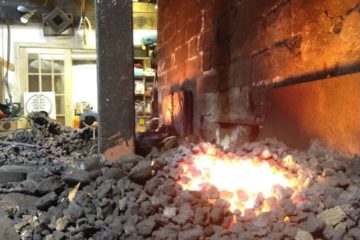 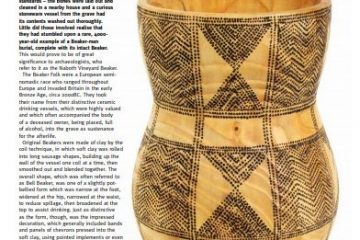 90 Years ago, a gang of roadmen in the village of Llanharry in South Wales, made an amazing discovery, a grave, complete with skeleton and drinking vessel, and the whole thing was more than 4,000 Read more…