It’s been far too long since we last wrote a blog! So what have we been up to since we last blogged, on 28th January, we’ve had major problems with the designer/builder of the last site, but that’s behind us, so I’ve been working on a new web site to replace it, and here it is. We’ve changed the name from Pren Turners to Pren Bala, and here’s to a new future!

The greatest news of all, and something that Sally and I are still in awe of, is becoming grandparents for the first time. On 21st February, little Osian Rhys popped into this world and changed our lives for ever. He’s such a bright, happy little soul and he changes a little every day

One month old and he’s already got a best friend!

Five weeks old and Osian discovers the power of the smile….he’s a happy little soul!

2 months and the smiles just keep on coming…..and little Osian isn’t the only one smiling!

So…our first blog on the new web site. Not a bowl, not a candlestick or stool, not a wood-shaving or even a speck of wood-dust, there’ll be plenty of time for that in the future. Right now, there’s far more important things to deal with. 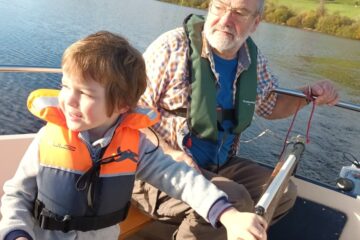 How not to end a week!