Stock building for the shop!

We’ve had an amazing few weeks at the shop with turned wooden items flying off the shelves quicker than I can replace them, but I’ve been busy making exhibition pieces for our favourite gallery, so I’ve had a hectic time in the workshop and have finally got a few shelf-gaps filled.

First came a trio of small pots made of off-cuts from a large, weathered oak burr that I’ve been drooling over for the last 2 years and which I finally cut into suitable pieces. The main piece has made a huge bowl which is “relaxing” for a few weeks before I bind it with leather, so that can wait for a future blog. For today, here’s the trio…. 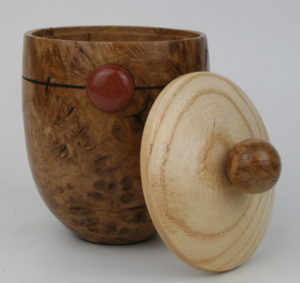 Firstly, a little trinket box with golden sandstone cabochons (front and back), a lid made of ash and a little ball-shaped knob from another off-cut of the burr. 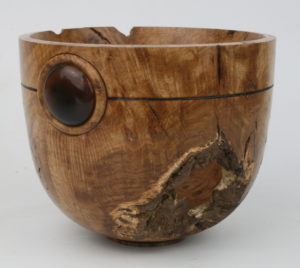 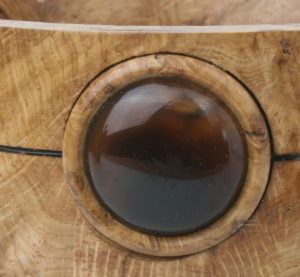 Then a small pot with a cabochon of agate, set in a burr oak cushion mount and with a single scorch line to draw the eye in to the stone. 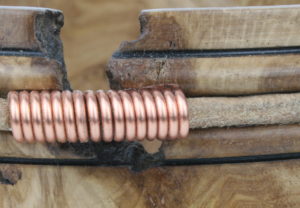 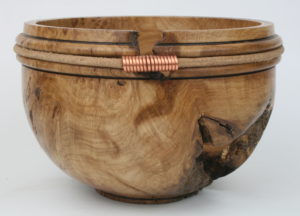 …and finally, a pot with a few holes in it and a pair of raised beads and a leather thong running between them. The leather has its ends embedded into a spiral of copper wire and once again, a few scorch lines help to emphasise the detail. 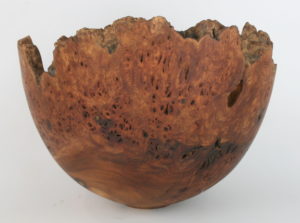 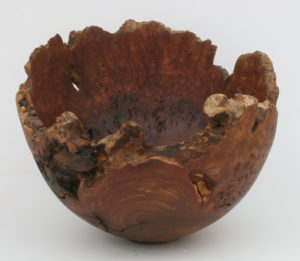 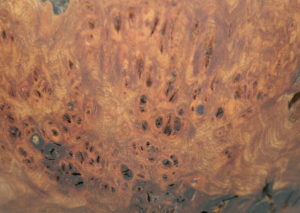 Stepping away from the oak, but not from burrs, here’s a pretty piece of elm burr which grew on Merseyside and was amongst a batch of a few dozen burrs that I bought about 4 years ago. It was far too dry, really, but still a joy to work and I’ve given it a good drenching with linseed oil. No doubt that it will drink a little more oil in the next few days. It was as good a piece of elm burr as ever I’ve worked. 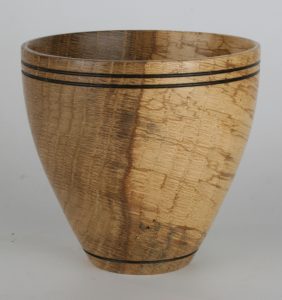 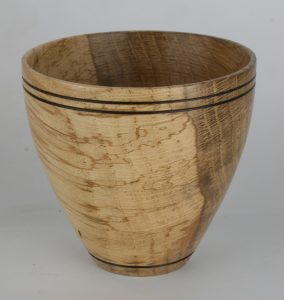 A fun, little pot next, from a small off-cut of oak with spalted sapwood. I gave this one a couple of scorch lines just to add a bit of interest as I felt it was a little plain otherwise.

A tall pair of oak candlesticks to take 2″ (5cm) candles. The tops, each in a tulip shape, have been scorched and scoured, then the open pores of the grain have been packed with copper gilt cream. 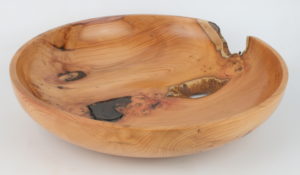 A shallow yew bowl with lots of natural features. I especially like the way that the sunlight shines through the hole in the bottom of the bowl! 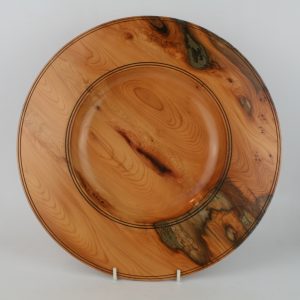 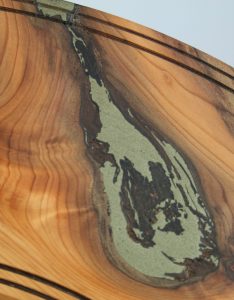 Cut from the same board as the bowl, this platter had more natural features than I felt comfortable with, so many of them were infilled with brass powder in resin. 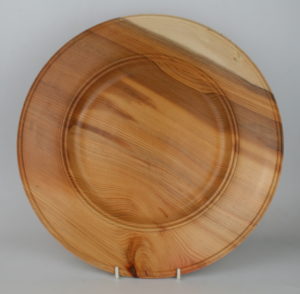 …and finally, another yew platter but this time from a lovely, clean piece of yew with excellent contrast between sapwood and heartwood and some pigmentation stain caused by the early stages of fungal attack.

A few of these pieces have already sold, even though they were in the shop for only a few days, but at least the shelves are looking a little less bare. 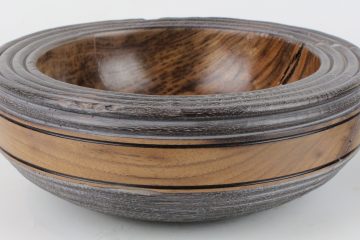