The shelves in the shop are finally filling up again and commissions are very nearly up to date, but we can’t be complacent because in a couple of weeks, a few major pieces are being delivered to Oriel Brondanw, our favourite gallery, so we’re going to need a few show-pieces. We like to keep just a few items that are up at the top end of the price range; they look impressive on the shelves and if used in a window display, they draw the tourists into the shop. However, the last few days have been spent catching up with the commissions list, rather than the stock list, as well as preparing for a demo that I did for a neighbouring town which has just staged its first arts festival.

One of the more interesting commissions was for a pair of wedding goblets to be sent over to County Mognahan. The customer wanted me to make them in a style reminiscent of traditional Cletic goblets, so they’re large and have a good, solid stem. Each goblet has a pair of captive rings cut in-situ from the region of the stem, before the stem was thinned down. 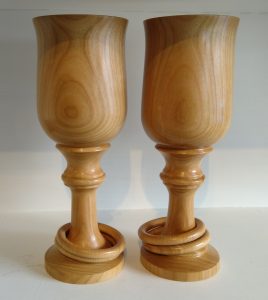 They had their final coat of lacquer this afternoon, so they’ll be on their way to Ireland tomorrow.

A customer from a local farm let me have a good rummage through a log pile a year or so ago and I’ve made a couple of bowls for them from their own wood. Another two bowls made it onto the shop shelves, but the rest of the timber was too far advanced with decay, so became firewood. This piece of ash had some minor cracks from being exposed to the sun for too long, and some pigmentation staining caused by fungal attack. The pigmentation was bleached out, but the cracks remain and add to the character of the bowl. It has been scorched and coated with verdigris wax, then bound with copper as a finishing touch. 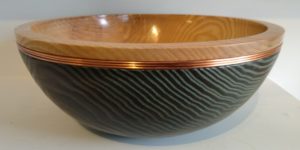 And now for something completely different…..from time to time we like to have a bit of fun with the shop window display and with the onset of autumn just around the corner, I turned my thoughts to hedgehogs frantically searching for food to cram-on the pounds before they lapse into hibernation. Here’s a batch that were seeking slugs amongst the window’s wood-shavings. I hope they didn’t find any! 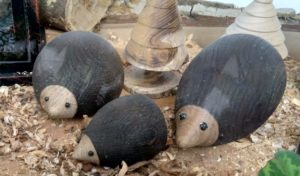 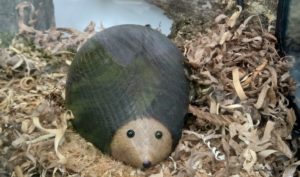 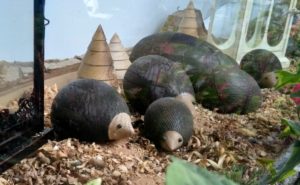 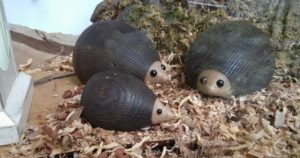 Finally, a shot from the arts festival. I took a little portable lathe and turned a scrap of branchwood into a pear, just to show how the lathe works, then gave a talk on how I source my timber locally and what sort of features I’m looking for. I took along a dozen or so pieces of timber to show spalting, burrs, contrasting heart and sapwood etc, as well as finished pieces of work to show what such timber can be made into to. The demo was a great success even if the crowd was small, but this is a festival in its infancy and it is hoped that a good library of images of the events they held, will help to increase interest and custom next year. 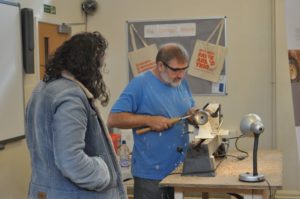