According to the Collins dictionary, a Spalt is a silly person; fair enough, because spalted timber is just bonkers!

Spalting is the process of change that timber undergoes when fungi start the process of decay. Catch the timber early enough in the process and the rewards are amazing. The timber takes on colours and patterns that change its nature dramatically, but catch it just a little too late and the timber turns to mush. So, what do the fungus look like and where could we find them!

The important thing to remember is that when we see a fungus it is nothing more than the fruit of the fungus, whilst the main body of the fungus is hidden from view completely, as it spreads inside the body of the tree. Think of driving a syringe into the tree and pumping gallons of fluid into it. The fluid seeps into the timber, invading it and feeding on it, staying a while to sap the lignin out of the timer, then moving on. When the fungus reaches maturity it grows a fruiting body on the outside of the bark. This simply allows the fungus to exercise its fertility by presenting spores to the atmosphere, to be borne on the wind or carried away by insects.

Let’s take a look at a few commonly found fungi that effect our trees…. 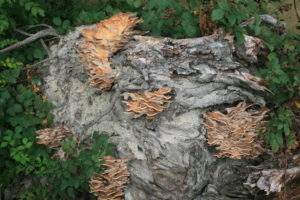 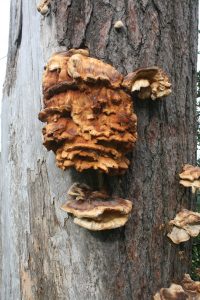 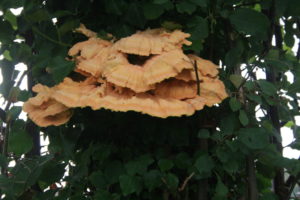 Here you see three examples of “Chicken of the woods”, the first is on the root-ball of a beech tree which fell in a storm a few years ago, the second is on a dead trunk of a fir, and the third on crab apple tree. Spalting on the fir, as with all softwoods, is extremely rare and I’d give an arm and a leg to have a lump of that fir! This is an edible fungus, the taste of which is said to resemble that of chicken. 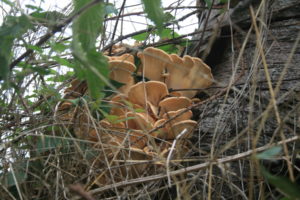 Next is a stump of a felled beech tree with oyster mushrooms growing on it. I struggled to get this picture as the stump was on a high verge, alongside a very narrow road, on a sharp bend, so I went there early in the morning and had to hold the camera high up above my head and click away, choosing the best photo for this blog. Oyster mushroom is highly prized by chefs. 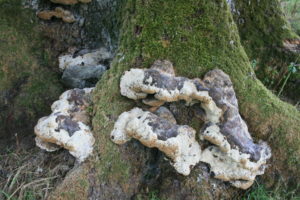 This (above) is the Oak Bracket, which grows at the base of the trunk of an oak tree. When active in its spore-production phase, this fungus produces a sticky, yellow fluid which seeps out of it in tiny droplets, inviting flying insect in to feed. They get traces of the fluid on their legs and wings, and then the wind-blown spores stick to them and carried away, possibly to land on other oak trees nearby. After fruiting, the fungus becomes quite woody as this one had…..I tried, but couldn’t even press my car key into it. 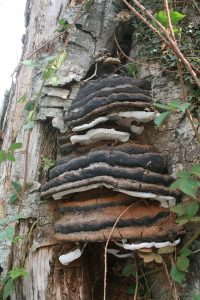 This is an odd one; called Turkey Tails, it grows a single bracket, fruits and drops its spores, then grows another bracket beneath it. this process keeps repeating until the fungus has no more room to grow another “tail”. This example is on the base of a rotted beech tree. 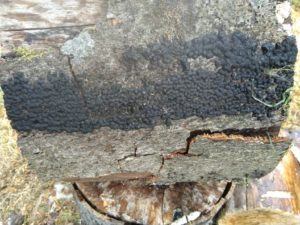 These tiny, black beads are each individual fruiting bodies of the amusingly termed “King Alfred’s Cakes”. Each one looks like a tiny, burnt little cup-cake. It thrives on ash and oak (this one is on beech) and is prized for the effect that it has on the timber, growing amazing patterns and blotches of colour. 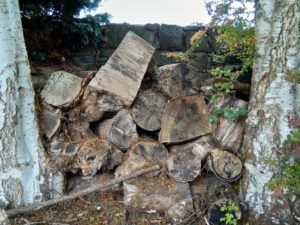 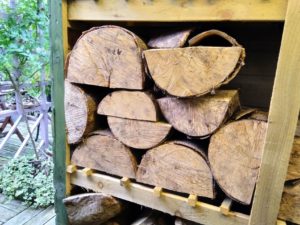 In my garden, underneath some mature Leylandi trees, I keep a pile of assorted logs, some old, some new. The old ones have fungi growing on them. these fungi may (or may not) spread to the new logs, then I take the old logs and prepare them for use in the workshop, leaving the newer logs, infected with the fungi, and piling even newer logs on top of them to keep the process going…or growing! The second photo shows a batch of split short-logs from a country house near Dolgellau. These were infected with fungi and showed good signs of spalting, so they were cut in half to reduce the stresses which cause splitting, and stacked in the drying shed. The process of drying removes the moisture that the fungi are utterly dependant upon and as the billets dry, they are providing about a 50% success rate for turning and I never forget the turners’ mantra, “What won’t turn, will burn”. 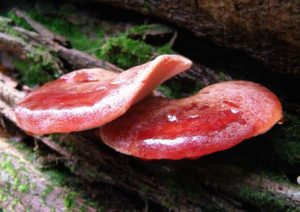 The above image is of the beefsteak fungus, Fistulina. When it starts its life, it looks like a little strawberry which grows and grows to resemble a huge ;lump of steak. it even exudes a red fluid, giving the impression that the steak is dripping blood, adding credence to the name that country-folk gave it. However, by the time that we see this fruiting body, the damage within the tree, as with all tree-borne fungi, is long-since done. Bands of fungal growth spread through the tree, darkening and softening its timber. The bands form structures like huge sheets of paper reaching out into the timber. each sheet of paper is originally separated from its neighbouring sheet by a few centimetres, giving a striped effect to the timber when it is planked. this effect is known in the trade as Tiger Oak. 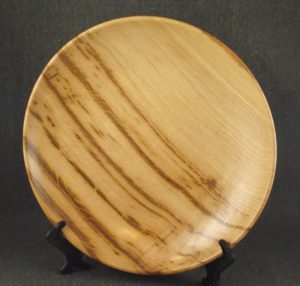 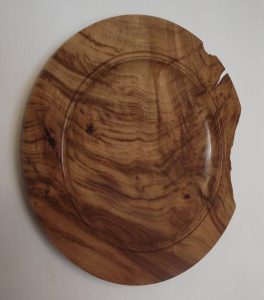 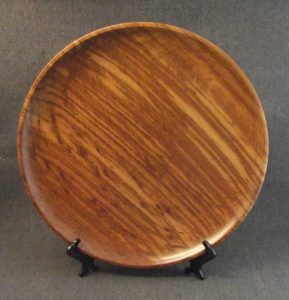 This series of images shows the process of infection of the timber by the beefsteak fungus, starting with tiger oak, on the left, and ending as what we call Brown Oak, on the right, which shows that the fungus has spread almost completely through the timber, its “paper” bands becoming ever-wider until they join up with their neighbours. 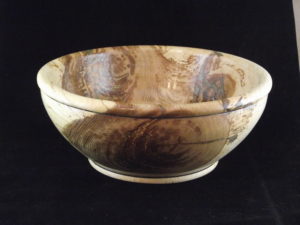 Staying with oak, the above bowl shows the spalting caused by the oak bracket fungus, which has caused white-rot on each side of the bowl. This has infected only the young sapwood of the tree, whilst the harder, more mature heartwood running through the centre of the bowl, shows the effect of beefsteak fungus, with its tell-tale signs of brown oak developing. This poor old oak tree had little chance of survival against this two-pronged fungal attack…but it provided some fascinating timber. 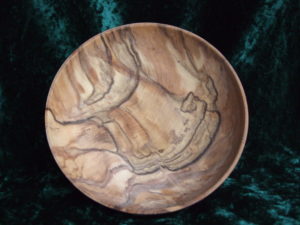 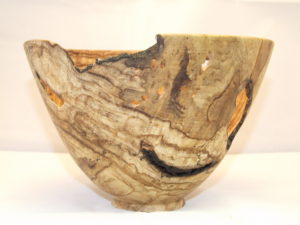 This is interesting….holly is prized for the purity of its colour, or more correctly, for the purity of its lack of colour. Holly has a milky-white wood which has been used for many centuries to provide a strong contrast in fine furniture, when used alongside timbers such a ebony and walnut, yet here we see an amazing example of what fungi can do the holly tree. When this tree fell in a storm, it lay on the ground for several years. The process of decay with holly is very slow; it is a dense, hard wood and the fungi have slow process through it. Its sap develops vivid shades of red, purple and even blue, but these colours fade within days of exposure to the atmosphere. What remains is an amazing landscape of patterns in the grain. 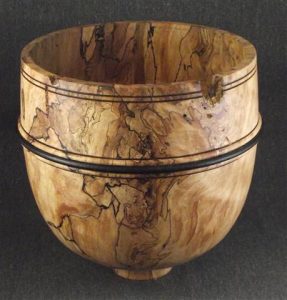 I cannot be sure which fungus caused this mottling on a large piece of beech, but it was probably the chicken of the woods, what I can be sure of is that few timbers excite me like spalted beech. When the fungus within the timber is allowed to grow unchecked, it spreads quickly, but when a second fungus attempts to invade its space, it develops a black skin, impenetrable to its neighbour. When we cut through the timber, the black skin shows up as zone-lines, and what an effect it creates. 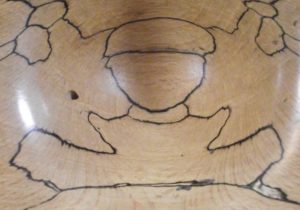 If these zone-lines spread fairly evenly and a bowl-blank is prepared from the timber, by the very nature of the fact that bowls are turned to produce symmetrical shapes, a symmetrical pattern will be produced. When nature produces millions of random patterns in its timber it just a matter of inevitability that some of these patterns will resemble familiar objects, which is exactly what happened here. A seated toddler, in a cap, and all produced by a fungus. 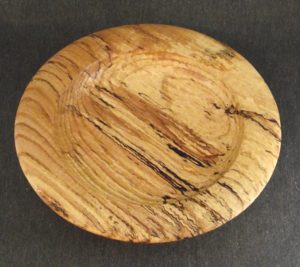 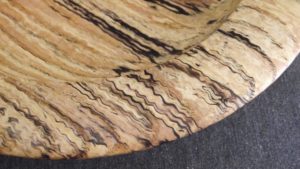 Finally, here’s a beautiful platter in Herefordshire ash. I bought this timber as a part of an enormous hoard of timber from an address near Worcester, and spent a few days hauling it all home. It was a lot of work but not regretted at all. What the ash displays is a series of zone lines working their way along the grain, but the grain has been caused to zig-zag in its growth pattern. This happens when stresses are placed upon the tree, perhaps when a neighbouring tree falls, suddenly exposing the tree to more wind. The tree responds by realigning its cells into corrugations, which adds considerably to its rigidity. Whatever the cause, it is an amazing effect, highlighted by the fungal zone lines.