It seems much longer than five weeks since we closed up for Christmas, so what have we been up to? Tuition has taken up much of my time from the first few days of January, right through until a few days ago. We took loads of bookings for January, and our tuition vouchers also sold very well.

I’ve just finished another article for “Woodturning” magazine, so there’s several new bowls on the shelf which I can’t yet show on here, as I have to keep them under wraps until the magazine is published in a few weeks time. However, one thing that I can show here is the result of a couple of years’ dithering over what to do with the most awkward lump of wood that ever landed in my workshop.

Some friends from Oswestry run their own business dealing in fossils and other pre-historic artefacts and they brought me a piece of bog oak in the hope that I would be able to make something out of it. Bog oak is simply pieces of oak, usually branches or even whole trees, which have fallen into a bog and lain submerged for many centuries, or maybe even millennia. It is highly prized timber, partly because of its age and partly because of the depth of its colour, which changes from the typical straw to brown colour of oak, into jet black. The piece in question had good colour, but was an awkward, wedge shape, with a myriad of splits and cracks in it, so I had put it away, out of mind, until inspiration took over and guided me along the road of what to do with it. Regretfully, inspiration was slow to arrive!

My photos show the wedge shape, thin on one end, thicker on the other. About 70cm long, overall, and about 30cm at its widest point. I decided to cut the thin end away and use it as a plinth to display a bowl made out of the chunkier end, but once I’d cut through the middle of the piece, I was a little concerned to see so many cracks in the timber. That didn’t mean that the timber was unusable, but it did cramp my style a little and dictated that work would progress very slowly. 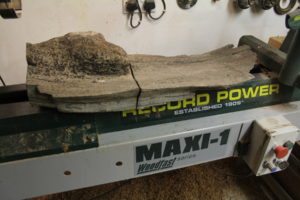 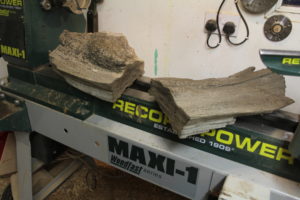 So here’s a picture of the lump that I had to work with, surely the most awkwardly shaped piece of timber that I’ve ever turned….but I wasn’t going to let that beat me!

Progress was slow, partly because the timber resembled stone, more than wood, but partly because to turn at any higher a speed would have created centrifugal forces which might well have caused the timber to shatter, with lumps flying off the lathe at speed. Cutting the outside shape was soon accomplished, then the bowl was wrapped tightly in cling film and gaffer tape, so that if it did shatter, I wasn’t going to be hit by the shrapnel. Hollowing the inside was much slower, but at least I was able to use my solid-carbide cutter in there, which was a great help.

Here’s the finished piece, which has now been delivered to my friends, who were very appreciative and who treated me to lunch, comprising the best fish, chips and mushy peas in Oswestry. Life is good! 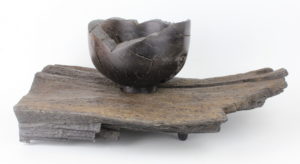 The keen-eyed reader might spot a little foot, just peeping out from under the plinth. The block which yielded the plinth was very irregularly shaped, so I cut three little feet for it to help it to stand without wobbling.

It might be a while before I try cutting any bog oak again!