A Night at the Opera, well, not really, but more like three months at the theatre!
Our friends at Theatr Clwyd contacted us a few days ago to ask whether or not we could help out. An exhibition of Helfa Gelf’s regional art work, which is due to open in a few days, was a little understocked, so there were two complete shelves left bare and rather spoiling the overall effect of some very fine ceramics on the other shelves in one cabinet.
Normally, I’d have snatched their hand off at such an offer, but after two months of spending half my days teaching wood turning, several more days dedicated to writing magazine articles and a few late nights out doing demos in North Wales, stock at the shop was running low. Added to that, sales at the shop had been good for several days over the school half term weeks, so I really needed to concentrate on stock building. So what did we do; we accepted the offer then worked hard for a couple of days to make a few show-pieces for them and pinched a couple of pieces off the shelf to make up the numbers.

So here’s what we took…. 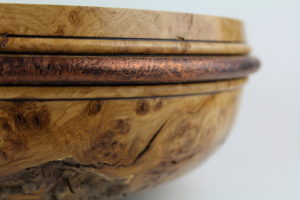 A fine piece of oak burr with a series of decorative beads running around the outside, the largest of them being embellished with copper gilding cream. The bowl is 13″  (33cm) diameter, so a good size. 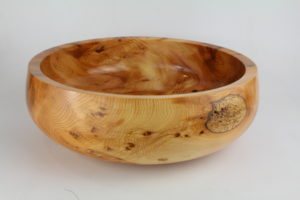 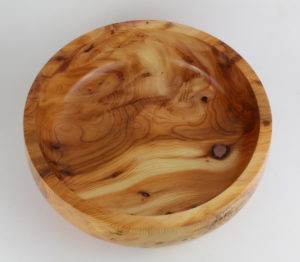 A stunning piece of yew full of pippy areas and streaks of colour. There was a dead knot in the base of the bowl, so the decayed wood was sealed and covered with copper embedded in cyanoacrylate adhesive. It is 15″ (38cm) diameter…..a big, heavy bowl. 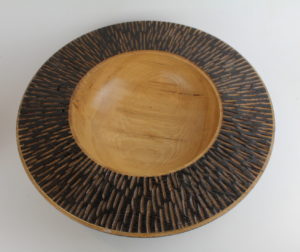 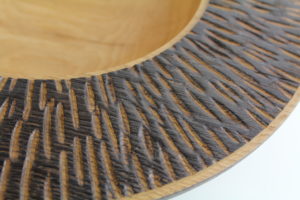 A really big piece of weathered oak with deep cracks in the body of the bowl. The outside has been scorched and limed, whilst the rim has been textured and lightly scorched to resemble bark. This bowl is 17″ (43cm) diameter, so it’s very big and very heavy. 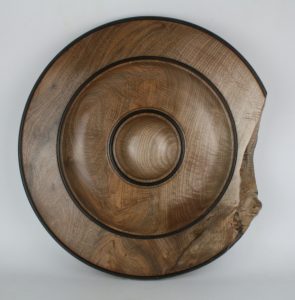 The first of the items from stock, a wall hanging platter in walnut, with a big, natural feature on its rim and a few decorative scorched beads. We call this piece “Tarian” (the Welsh word for a shield) due to its resemblance to ancient Celtic shields. It is 18″ (45cm) diameter. 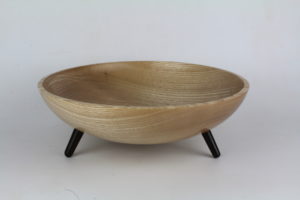 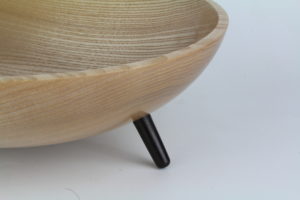 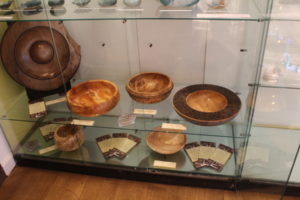 The final piece, I somehow failed to photograph, but it’s the beautiful piece of spalted beech which you can just see on the lower shelf, on the left.

The exhibition runs through March, April and May and we’d love to hear from anyone who has calls in and sees the display. 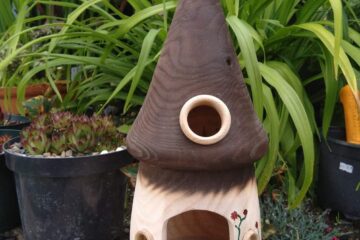 Pixie Houses….who’d have thought it!

In these uncertain times which can be very hard on small businesses, we self employed artisans have to find alternate ways to earn a living. Purely by chance, such an alternative came my way a Read more… 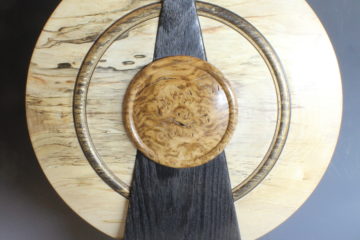 Something new for me!

When the Coronavirus lock-down bit hard into the lives of artists and crafts-people, I had just finished developing the tuition side of my business, along with distributing all my work around a variety of galleries Read more… 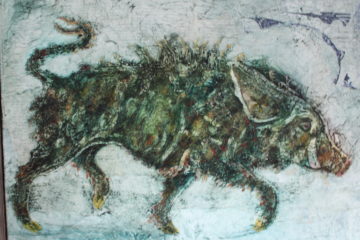 Greetings from Bala in lock-down, where my lathe must be wondering if I’ve forgotten where its on/off switch is! Apart from turning a few sample pieces for an article that I was writing, two weeks Read more…