Cracks, woodworm, nails and weathering….that was quite a day!

My student this week was a customer who has been calling in to the shop for a few years, let’s call him Dave; it’s a made-up name as “Dave” is happy to have this blog written, but wants to remain anonymous.

On that first meeting, Dave and I talked for an hour or more about how local timber can be turned into finished pieces, about how some local farms have provided their own timber for me to turn and about the range of things that I was making. That sowed the seeds of an idea in Dave’s mind; he had bought an old farm property near Bala and had the trunk of a dead plum tree from the garden. Over the next year or so I made numerous bowls and even pens out of the wood from that trunk and it’s a reflection of the kindness of the man, that Dave gave most of these away to members of the family that had lived at the farm before he bought it, so that they could each have a memento of their former home.

What especially drew me to Dave was his appreciation of the sort of timber that I love to work with. Splits, cracks, worm, fungal infection and even embedded nails and staples didn’t bother him, but what was important was the beauty of the grain.

Fast-forward a year or two and I started teaching woodturning at the new workshop and Dave had seen my advertising leaflets in a dispenser outside the shop door, so he booked himself a six-hour day’s tuition just to see if he could make something in the style that we liked so much. That day’s tuition took place on Wednesday this week and Dave brought his own piece of timber with him, or, to be more precise, Dave brought about a dozen pieces and we sorted through them in the back of his car, before selecting one that would fit the bill. 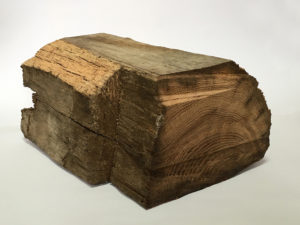 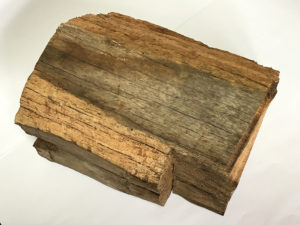 The timber had been cut from an oak beam, roughly hewn from a half-log. It had sapwood on one corner, which had suffered badly by an attack of woodworm. It had lain outside in all weathers and discolouration had taken place around the perimeter, with numerous partial-thickness cracks radiating around the outside. As pieces of timber go, for my tuition sessions, this was hardly the norm. We occasionally encounter the odd crack, or even the odd worm-hole, but this was in a league of its own and commanded a high level of respect for health and safety issues.

Things started well and we soon realised just how hard the wood was going to be . The heartwood of all timber has mineral deposits in it and as a tree ages, the cells of the heartwood eventually fill up with such minerals. When the tree is felled, the minerals slowly consolidate. Some may crystallise and the very early stages of fossilisation take place; admittedly, this is a process which can take thousands of years, yet the effects are evident after just a few hundred years with the wood becoming very much harder.

Dave’s piece of wood had started that process and when tapped with a turning tool, there wasn’t the usual resultant deep thud that you expect with oak; instead there was a distinct ring, almost as though the wood were metallic. We got it mounted on the lathe and Dave practised a few roughing cuts and finishing cuts, and slowly our roughly hewn lump of timber began to resemble a bowl. 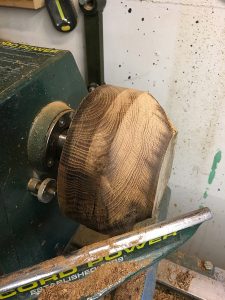 Progress was slow. We had to keep the lathe speed down because of all the cracks, so we stopped the lathe frequently to check on the state of the timber. On one such check we even found an old nail embedded in the wood and I honestly believe that the wood was harder than the nail. Tools were re-sharpened frequently!

A chucking point was established, ready for turning the timber around and hollowing the inside. 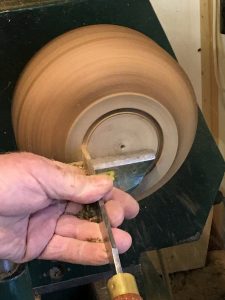 Dave fancied the idea of a few beads running around the bowl, and also liked the way that I applied finishes such as copper to them, so we cut two beads (there wasn’t room for any more). The effect that we settled for requires the beads to be scorched and cleaned, then smeared with a copper-based gilding cream, but first the gaps between and around the beads had to be scorch-lined. 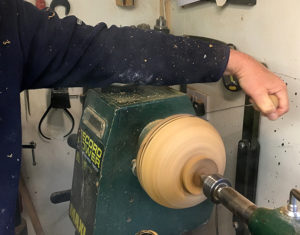 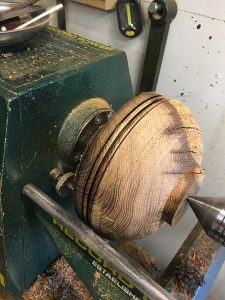 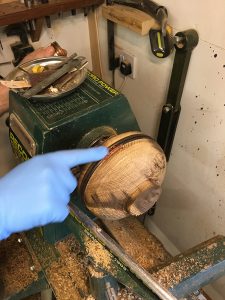 Once the beads were cut, scorched and gilded, the surface of the outside of the bowl was scraped clean and finely abraded, then liberally coated with sanding sealer. 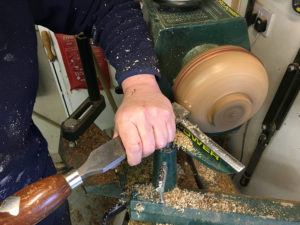 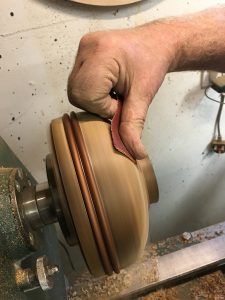 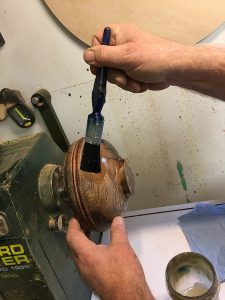 The bowl was turned around and hollowing of the core began; this was to be the complex part where attention to safe practices became even more important than it previously had been. 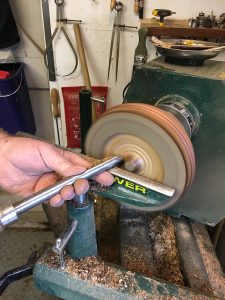 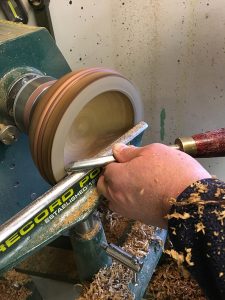 We had to make a decision about just how thin to make the bowl wall and this was to be thicker than usual, to accommodate all the cracks and worm. Also, there was a very wormy patch of sapwood on one side and if we’d made the bowl wall too thin, we would have broken through to this and it would surely have shattered. 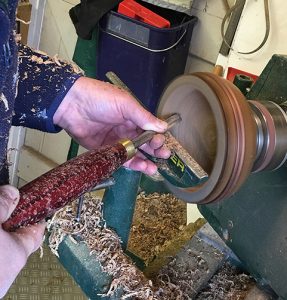 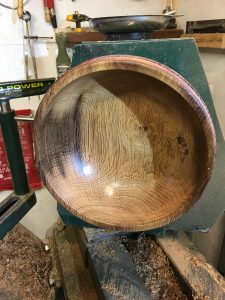 The inside was finished, sanded and sealed, then we turned the bowl around again to clean off the chucking point on the underside. 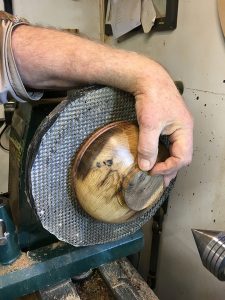 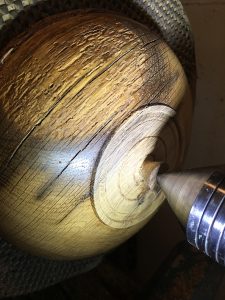 You can clearly see the area of wormy wood above, giving testimony to the ravages of time on this piece of timber, the dark staining of the weathering process is also evident in these pictures.

So here’s the finished bowl, I think you’ll all agree that it has “age” and it has character, but above all this, it stands as an excellent example of what a novice learner can achieve. Dave did an excellent job of his bowl….we spent close to six hours working on it, but they were hours well spent! 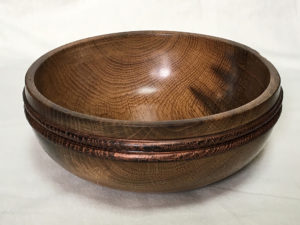 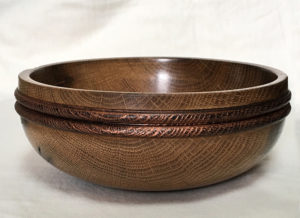 Just to remind you….here’s what Dave started with! 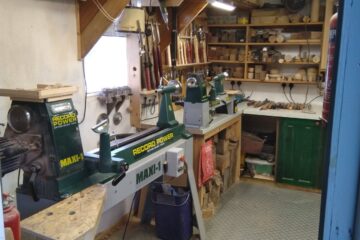 Okay, let’s forget all the nonsense associated with this year and start tomorrow afresh. As if the spring and summer lockdown wasn’t difficult enough to ride out, and the autumn “Firebreak” equally tricky, the sudden Read more… 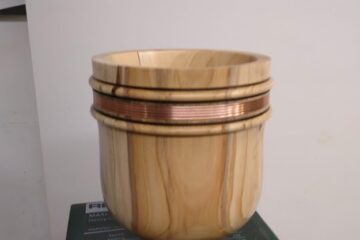 It’s a strange word, “Craft”! On the one hand we associate it with craftsmen and we can look back to Mediæval times when stonemasons, silversmiths, tanners and many other crafts established their craft guilds, with Read more…

How not to end a week!