Last Saturday, in the middle of the afternoon, I heard a rumble, a dull muffled rumble, coming from the store-room, and immediately afterwards, there came a few sharper clattering sounds. The latter were easy to identify; it was lumps of plasterboard dropping on the floor. The former remained a mystery for a while, that was, until I got a step ladder and a lamp, reached my head up into the void above the ceiling and then withdrew in disbelief. I wasn’t very certain about what I was looking at, I just knew that something wasn’t right in what I saw. Oh, and I did have the presence of mind to take a quick photo so that I could ponder the vision from a safe distance.

Here’s what I saw… 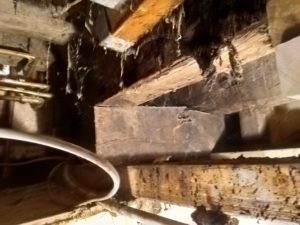 …I should explain….In the centre of the picture, which was taken inside the dark void of the ceiling, you can see an old wooden beam with a crack in it. Above it there is a new timber, running with water; so much water that you can see it running down off the cobwebs. Now I’m no expert, but I do know that beams in building might be compromised if they’ve cracked. What I also knew was that this short, old, cracked beam lay directly on top of a structural pillar. Under normal conditions, only the pillar has always been visible, but today I was afforded a glimpse above the plaster-boards.

Attempts were made to inform the landlord, but to no avail, so what else could I do. I was unsure about that, but I knew what I must not do; and that was to do nothing! My main concern was that the structure might be unsafe and that there was a family living in the flat above the shop, so I locked up the shop, stood outside the door and rang 101. A half hour later the police arrived, followed by the Fire Service, the building was evacuated and various wheels were put into motion. Our local authority sent out an architect at close to midnight, and he confirmed just how serious the situation was. A couple of days later, with businesses closed down and residents being put-up in a local hotel, I attended a meeting with a local builder and a structural engineer. The building was made safe with acro-props to support the snapped beam.

The next day was rather sad; I dismantled my little studio workshop and removed my shop-lathe, a host of tools and other equipment, plus much of the shop-stock so as to make for easier access for the builders and for a further inspection by the structural engineer. My picture shows the little hole in the ceiling and the props put into place to keep the beam safe… 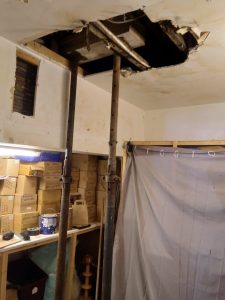 Then, with the room cleared, the builders moved back in to rip the rest of the ceiling down and to make an exploratory dig into the floor.

The next few pictures show the position after the builders left today.

Firstly…on the left you can see the pillar and the short, old beam which has snapped. To its right are the acro-props put in to support the main beams…..you can also see that the rain water is still running through the structure. 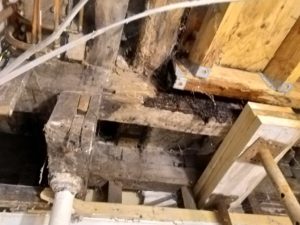 Next…two photos looking up at the short length of beam that has cracked. It is only about 90cm long with structural beams perched, one on each end of it. Anyone who knows anything about building practices will know that this is a poor practice. The pillar, which is scarily small (only 65mm diameter towards the top) is cutting into the wooden beam, concentrating the whole of the load into one small area; no wonder the beam cracked. 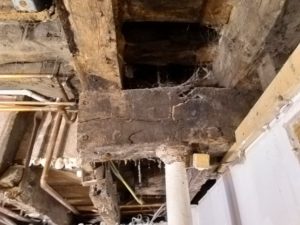 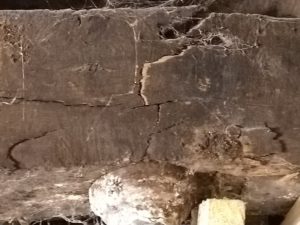 Finally, you can see from the picture below, that all of these beams were re-cycled from other uses, when they were installed in the building, many decades ago. What the pictures do not show, is that the pair of beams resting on the cracked beam, are supporting a metre-thick stone wall, but that’s not all. On top of the pair of beams is a third beam, running off at 90 degrees to it, and herein lies the main problem. That third beam, plus a few others linked to it, is supporting the entire rear wall of two floors of the building above our shop. That wall is another metre-thick stone structure, and our builder estimates it to be about 40+ ton in weight. 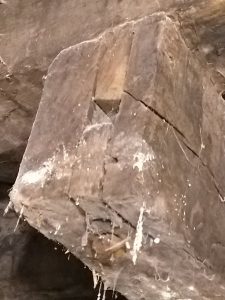 One last word of concern…this tiny pillar, which is supporting two stone walls (let’s say about 50 ton between them) sits on a concrete skim over a floor of compacted gravel.

So what happens next? Subject to confirmation on Monday, when I understand that the local authority will meet with the structural engineer and the builder, the pillar will be removed and the floor excavated. Foundations for a new pillar will be cast and when the concrete has set, the new pillar will be slotted into place. Easy!