Yesterday I tried something new! I think it’s quite important in the development of any skill-set, to push yourself and try new things, although I must admit that I do tend to stick to what I know. As many people will know, I love to incorporate materials into my turning that work well alongside the timber itself, and for some time I’ve been wanting to use forged iron or steel, but haven’t had the skills or the equipment to do it. So, on Saturday I set off early and drove to Glyn Llifon, near Caernarfon, where the old estate workshops still have a fully functioning forge, run nowadays by Ann Catrin Evans, an internationally know sculptor and jeweller who works as a blacksmith, silversmith and goldsmith. Luckily for me (and for many other people in the region) Ann is one of those skilled artists who enjoys passing skills on to others, so I booked a workshop session with her and yesterday, the day finally arrived.

There were three other students at the workshop and as we all met up, had a coffee and a natter, the sight that greeted us was amazing; like stepping back into another world. My craft of woodturning is an ancient craft, but much of my workshop equipment is modern, whereas Ann’s forge is a timeless zone in its sights, smells and general atmosphere. 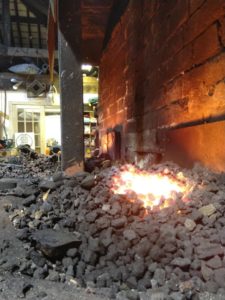 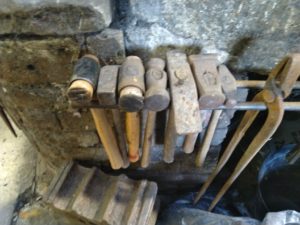 An array of tools and the rosy glow of the double-hearth forge were tantalising and I was itching to get started. Ann gave us the customary H&S briefing, then got straight into demonstrating her skills…. 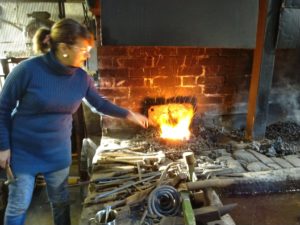 ….I don’t think that any one of us realised just how rapidly the steel would come up to temperature and take on that bright orange glow; it seemed that just a few seconds were enough to make the steel red-hot and malleable. 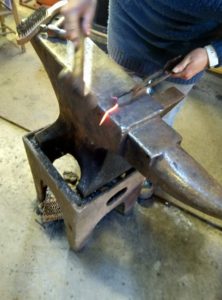 First Ann made a simple scroll-shaped pendant, then a cup-hook and a drawer-knob. Seeing her fashioning recognizable items from such a (normally) cold material was amazing. Like all good craftspeople, she made it look so simple, but we were about to discover that was far from the truth! 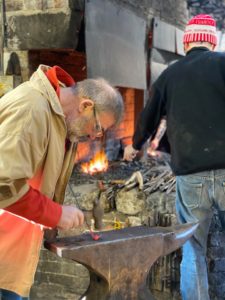 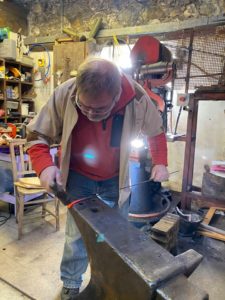 The problem with hammering steel at the temperatures that we needed, is that a material that we were all familiar with as being hard and inflexible, suddenly becomes much softer and it easily bends and twists as it responds to the beating hammer. Unfortunately, none of us was particularly skilled at wielding those hammers and little errors of judgement that we all made in delivering those blows, sent the steel bending off in directions that we hadn’t planned. A little time was spent re-heating and coaxing the steel back into shape, trying to achieve that subtle scroll that Ann made so simple. 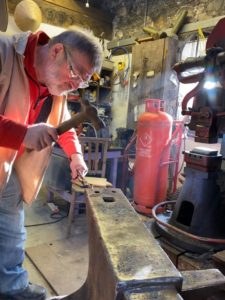 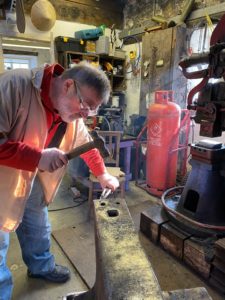 Throughout all the time that I have been turning, I have relied upon the sense of touch, feeling the material, sensing it’s thickness and its surface texture…..but therein lies the problem. Common sense told me not to do so, but I was constantly aware that instinct might take over; gladly, it didn’t! 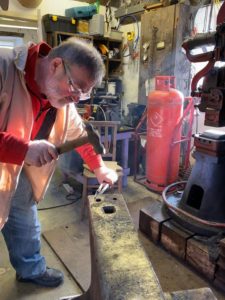 Eventually, by the end of the morning we all had filthy hands, soot-smudged faces and ringing in our ears, but we each also had a little set of finished pieces that we were pleased with, and that’s as much down to Ann’s skills as a coach as it was to our skills as blacksmiths. 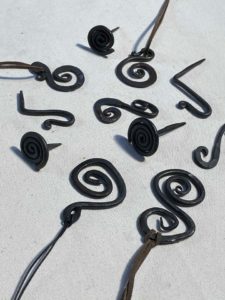 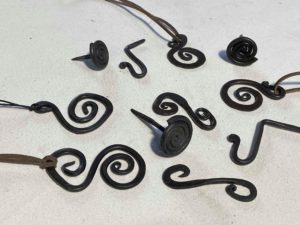 ….that’s my three pieces, in the top row, numbers one to three working from the left.

I have got the bug……the plan is that when I have finished building our conservatory I will design and build a hearth which can double up as a barbecue. It won’t happen over night, but it will happen. 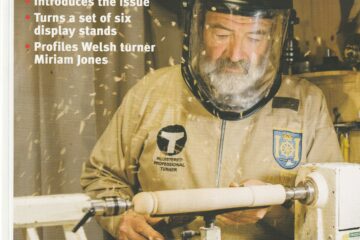