It’s a few years since I last made any of these and if I recall correctly, I made about ten pair of them. The first pair was made for the John Lewis Partnership, at their hotel here in Bala, then a few were made for shop stock when we still had the High Street shop, but most of them were made for our friends at Palé Hall Hotel. I had just started experimenting with scorching oak and wanted to try it out on something other than an oak bowl, so I tried making a simple candlestick, but the texture and the overall appearance of the technique called for something much bigger – something more imposing.

By keeping the column a plain cylinder the texture was able to be the star, and the contrast of an un-textured base and capitol just set the column off to a tee. I’ve tweaked the design a little, as I felt that the capitols looked just a little heavy, and this pair is about to be packed and posted off to a new home.

I’ve made and waxed a spare pair of columns, but have run out of 4″-thick oak, so the next pair, just for a change, will have elm bases and caps and they’ll be up for sale at my display at Celf Aran Arts in Ty Siamas, Dolgellau. 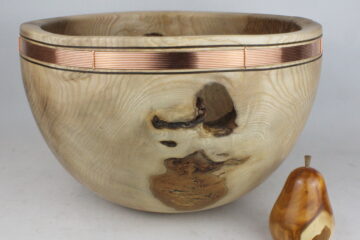 I was tidying-up my dry wood store a month or so ago and there was a big lump of dry ash in there, getting in the way, so I did the best thing possible to Read more…