Pren and the John Lewis Partnership 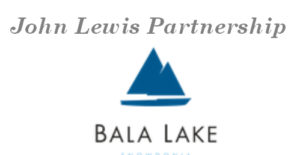 Since selling the very first few pieces of my work, we have developed a relationship with the John Lewis Partnership through their amazing hotel and activity centre right here on our doorstep, in Bala. Set on the gentle foot-slopes of the Berwyn Hills, the Bala Lake Hotel commands an imposing view over Bala Lake, or Llyn Tegid as we know it locally. 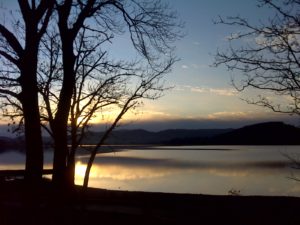 The hotel sits above the lake on the southern shore, enjoying some amazing sunsets.

There was a sense of serendipity about the initial partnership between Pren and the hotel; we were looking for somewhere local to display our work, whilst the management team at the hotel was looking for a local maker and supplier of a product that they could display. It seemed inevitable that we should form a partnership of our own! 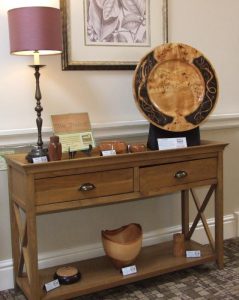 Just a small selection from our first ever display at the hotel.

Initially we set up a display of several pieces of our work, each piece being offered for sale. Our display was limited to a foyer and corridor and it soon proved to be popular with the guests; then along came Christmas! We must all be familiar with the John Lewis Partnership’s Christmas advertisment on television, and in our first year at the hotel, penguins became the central theme of their campaign. At first, I turned two penguins (Mr and Mrs Penguin) just for fun, which were despatched to the hotel’s reception desk, then two little adolescent penguins were added. What followed could not have been foreseen….penguins became the in-thing and I frantically turned penguin after penguin to deliver them on an almost daily basis. 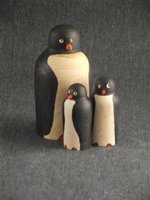 Fast-forward to the autumn of 2016 and I received a phone call, inviting me to call in to the hotel to meet the team and to discuss the possibility of Pren making several display pieces to commission and I shall never forget the words that one manager uttered, “We don’t really know what we want, but we’ll know whether we like it or not”; well, that filled me with intrepidation!

Several weeks later and the commission was complete, and here’s a taste of a few of them….

“Concentricity”, a sculpture in oak burr with slate at the centre and scorched elements at the wings 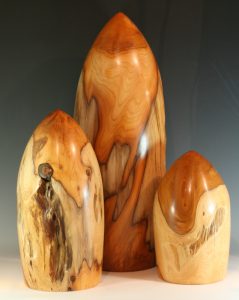 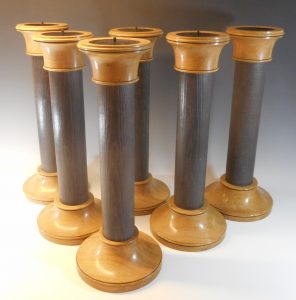 One pair of these oak candle stands with scorched-oak columns. 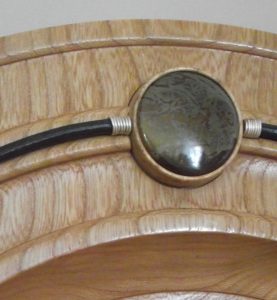 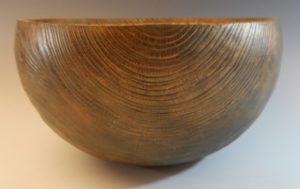 A huge bowl in scorched and textured ash

We are very fortunate indeed, that guests at the hotel are sufficiently intrigued by the collection to want to know more, and so we have regular visits from the Partners. Perhaps the most popular piece is the “Partners” sculpture in the above photograph. Mounted onto a board of scorched oak to blend in with the mantle shelf, the sculpture resembles 11 people, all very different in their appearance, yet all connected by a common element – just as the Partners are in real life. We still make these, in ones and twos, for Partners who wish to take their own mini-sculpture home with them.